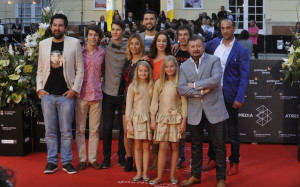 Yesterday was such a great day in the Malaga Film Festival with the presentations of two feature films in which I’m currently working on: MANIAC TALES, a film produced by Kike Mesa (Kándale Films) which contains 5 stories directed by 5 different directors, and Enrique Garcia’s thriller RESORT PARAISO

After the presentations we finished off the day walking the red carpet and partying with the movie team. Thanks a lot to everyone who came!